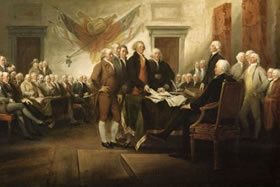 The 4th of July is one of the most popular holidays in American culture, which is understandable considering that it symbolizes America’s independence as a sovereign nation. On July 4th, 1776, America declared its independence from Great Britain, solidifying an eleven-year war that won the thirteen colonies their freedom and ultimately establishing the United States of America. However, just because America was free from Britain did not mean freedom for everyone.

Writer and vlogger John Green hosts Crash Course, an internet mini-series featured on PBS LearningMedia that covers topics ranging from chemistry to mythology.  His Who Won the Revolution clip details the experiences and struggles of the Continental soldiers, slaves, women, and Native Americans to attain freedom in the newly-born United States. This video provides alternative perspectives that shed light on areas of U.S. history that are not typically studied in high school classrooms.

While the 4th of July is a holiday that has quite a bit of history that can be unpacked, it is still important to relax and enjoy the day as well, so have a happy holiday.