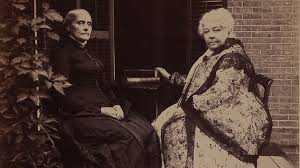 The right to vote is as important today as it was for women’s rights activists who fought long and hard to win the vote 100 years ago with passage of the 19th amendment.  Among those activists, Susan B. Anthony and Elizabeth Stanton Cady spent their lives securing the vote for woman.

PBS LearningMedia offers powerful resources for grades 3-12 that allow students to celebrate this August 18th anniversary anytime by learning about the heroic efforts of these leaders and legions of other women who sparked social change and paved the way for woman’s suffrage.

Elizabeth Cady Stanton | Orator, Author, and Activist:  This PBS LearningMedia lesson plan for grades 3-7 teaches about this powerful orator and author who, along with Susan B. Anthony, co-founded the National Woman Suffrage Association, an organization dedicated to obtaining equal rights for women.  Students also will explore the need and challenges for social change.

Ken Burns in the Classroom | Not for Ourselves Alone:  Seven videos and a lesson plan for Grades 6-12 are created from the inspiring, two-part, four hour film that tells the story of one of the most compelling political movements and friendships in U.S. history — that of Elizabeth Cady Stanton and Susan B. Anthony.

At PBS LearningMedia you’ll find additional resources on Elizabeth Cady Stanton for grades 3 through 12 that expose students to this phenomenal women!